Some Interesting Facts about Rainbows

The retina in the eye has two types of cells for detecting light: cones and rods. There are three types of cone cells (Short [S], Medium [M] and Long [L]) that respond differently to different wavelengths as shown below… 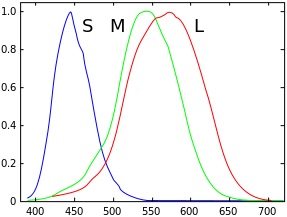 You can think of the S cone cells reacting to blue; the M to green and the L to red. Most colour blindness is due to a fault in one type of cone cells. There are around 6 million cone cells in a human retina concentrated in the centre. They work best in light levels associated with daylight and not so well at night.

Rod cells on the other hand are more sensitive than cone cells, and therefore are responsible for night vision. They are not able to detect different light wavelengths like cone cells. So at night, when rod cells are providing night vision, colour tends to be absent. This is why Moonbows tend to be black and white.

So with the three types of cone cells, different combinations of light frequencies will cause each cone cell type to respond in a certain way. Our brains interpret this as different colours. 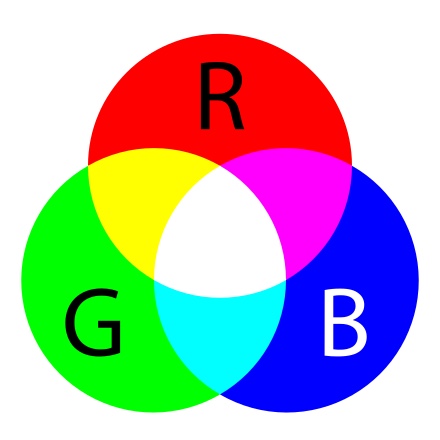 If we look at just red light the brain would receive a response from L cones but not much from M and L cones. We would see red. If we look at red and green light, the brain would receive responses from the L and M cones and not much from S cones. We would see yellow. The human eye is able to detect about 10 million variations in colour but for reasons of brevity we refer to the spectrum as: violet, indigo, blue, green, yellow, orange and red. This is thanks to Isaac Newton who named it thus. Things often got named in sevens.

What is White Light?

White light is what we perceive when we see light from all parts of the visible spectrum at about the same intensity so that no one colour dominates. The sun is a reasonable example of this. 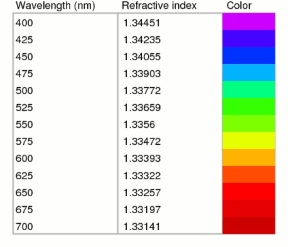 It is possible to split white light into its constituent components because the refractive index of different wavelengths is different in something like glass or water.

Black is the absence of all colours.

Conditions for a Rainbow

In order for a rainbow to occur you need some sort of white light source, like the sun. You also need some something to act like a prism to split the white light into its constituents and it turns out that rain drops can do just this.

When the raindrop falls to earth it experiences air resistance that will tend to flatten the underside so the shape will actually be a slightly squashed sphere. However, lets assume its a sphere from here on.

Lets assume light hits the raindrop at an angle α and is refracted at an angle β as shown in the diagram.

The reason to setup the problem like this is that we can easily apply Snell’s Law to the air / raindrop boundary. This states::

is the refractive index of air which is approximately 1

is the refractive index of water, which for red light is about 1.33 and for blue about 1.34

Now, consider the angle through which the light is rotated through coming into contact with the water raindrop. There are three points to consider:

So, the total rotation, 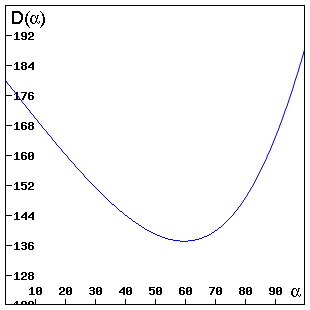 This equation is interesting. Graphing α versus D gives the following shape to the curve, and the key to the formation of the rainbow is the minimum point of the curve at about α = 60°

The point about the minimum is that the value of D is approximately the same for a small change of α. What this means is that light hitting the raindrop at or around, this particular angle gets deviated by the same amount so there is a peak in light intensity at this angle. This peak in intensity is what you see as a rainbow.

To get the exact value of α, its easy to differentiate D with respect to α, and for the minimum this equals zero:

So, solving for red light

So this is why each colour in the rainbow appears at a slightly different angle. The point to note is that all points that form this angle will appear, for example, red. It is not that there is no other light coming from this direction, but rather there is a peak in red intensity that dominates the other colours at this angle. All points that form this angle are forming a circular arc. How much you see, depends on how much the ground is getting in the way of.

Some things to notice.

Inside a Rainbow is Brighter than Outside

The area inside the Rainbow arch will appear brighter than the rest of the sky.

In order to understand this lets look again at the graph of  angle of rotation, D versus angle of incidence, α.

So inside the rainbow, there is more light (of all wavelengths so it appears as white light) than outside so the inside appears brighter. You can see this effect in the photo below.

Its simple to set up a similar diagram to the primary rainbow but with 2 reflections.

Consider the angle through which the light is rotated through coming into contact with the raindrop. There are now four points to consider:

So, the total rotation,

Differentiating and equating to zero to get the minimum gives a similar equation to the primary rainbow. Working through it gives:

So, solving for red light

Some things to notice.

Third and fourth order rainbows are possible with 3 or 4 internal reflections. These are rarely seen as they are close to the primary and much fainter so not easy to spot.

Following the same approach above for a tertiary rainbow with three internal reflections within the raindrop gives an angle of 37° between the red part of the rainbow and the sun.

It is possible to see several narrow, faintly coloured bands bordering the blue edge of a rainbow; i.e., inside the primary bow or, much more rarely, outside the secondary. These bands are supernumerary rainbows. The supernumerary bows are slightly detached from the main bow, become successively fainter along with their distance from it, and have pastel colours (consisting mainly of pink, purple and green).

The effect appears when water droplets have a diameter of about 1 mm or less; the smaller the droplets are, the broader the supernumerary bands become, and the less saturated their colours. Due to their origin in small droplets, supernumerary bands tend to be particularly prominent in fogbows.

The alternating faint bands are caused by interference between rays of light following slightly different paths with slightly varying lengths within the raindrops.

At night it is possible to see a Moonbow where the moon takes the place of the sun as light source. The mathematics are identical to rainbows.

I have seen this once and the Moonbow appeared monochromatic, I suspect because of the low light intensity and the fact that I would have been using my night vision where rod cells are detecting light but not colour.

It is also possible to see rainbows in fog, so called Fogbows.